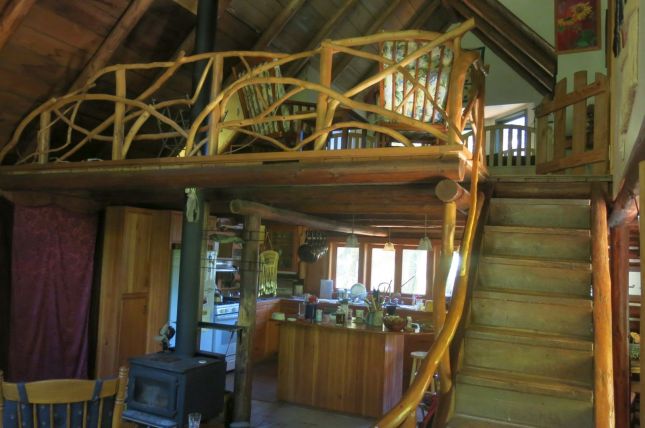 So many things were astonishing this past week, including a brilliant rainbow on our drive home from the cabin that was so close it was in front of the trees, but the Most Astonishing Award goes to a bushy-tailed woodrat.

Bushy-taileds are incredibly cute. They have soft-looking fur that folds and parts like a chinchilla’s. They have big expressive eyes and large round ears. Behind them is a long acrobatic tail that, unlike on other rats, is hairy–it looks like a bottle-brush. When you see one in a livetrap, you want to cuddle it and give it a name.

We’ve put up with their intermittent use of our generator room, of an empty tack room in the barn, and of the eaves near the porch. We almost sort of semi-like them around. After all, they’re native.

With less enthusiasm, we’ve tolerated them inside the cabin, the potent smell, closed-in, woodsy, and uriney; the sprinkling of hard pellets where we don’t want woodrats to climb, like my pillow; and the sticky puddles of urine the color of concentrated yellow food coloring. That stuff must be squirted out. It extends in long drippy spurts. And it stains.

We’ve accommodated them by sewing shower caps for mattresses, spreading a flowered shower curtain over another surface, and closing food and ruinables into boxes except when we’re using them. When we arrive we have handy a whiskbroom and a dust pan (ha, that’s a euphemism), Clorox spray and paper towel (yes, paper towel).

There are thousands of acres of habitat for them outside, so we’ve set live traps, with the thoughts of a) catching them, and then b) moving them to the barn or beyond.

On Friday night, dishes done, hot tub already enjoyed, book read and then laid down, lights out, we were settling into the good feeling of everything we’d accomplished. We’d dragged out a fallen tree; cut, split and stacked its wood; made good meals; learned from fifteen foresters who came for a maple syrup workshop. We saw salmon that had returned to the creek to spawn . . .

. . . when we heard rasping, chewing, gnawing. Clattering like Santa’s reindeer, several at a time, strolling from edge to edge of our roof. A repeated metallic clang.

“Poison it!” I screamed. I visualized the severing of wires, the drawing out of insulation, the sullying of uncleanable pockets between ceiling and shingle above us, between risers and sheetrock in an interior wall. I visualized our stovepipe disassembling, a metal vent snaking to the floor.

My husband mumbled but got up.

He banged on walls and he stomped as I ranted about the range we’d  replaced because of varmints, the generator room I’d (disgustingly) cleaned of woodrat sign and he’d tried to seal off, the article that said bushy-taileds have thirty-seven species of flea, louse, tick, and mite.

Our actions had no effect.

The dog lifted his head toward my husband, then lay it back down.

“We have to use poison,” I screeched this time.

My husband closed the bedroom door so the woodrat wouldn’t be so loud. But it was.

There in the closet, adjacent to our bedroom, were two piles of our kindling made up of fifty-seven pieces. It was simply constructing its midden.

Imagine, at least fifty-seven trips from the kindling bucket, across the room, up twelve steep steps, and into the closet.

And it had pulled the rectangular cookie sheet from the counter part-way across the floor. It had found my favorite tea-towel, which it incorporated still perfectly folded. It had taken a bracket fungus from the kitchen windowsill, the one I’d scratched a love-message in for my husband. Windowsill, floor, up twelve steps, pile. It had taken a home-made coaster, and a pen. (A different article said bushy-tails are the packrats for which the term was coined.) On the counter were spread the remains of some of the flowers (it targeted the composites) that I’d been given for my retirement and my birthday this week.

That explained the bang, thump, clang, and clatter, although I’m not sure what the sawing and rasping were. Still, the piles gave me relief. The chinchilla-like darling wasn’t destroying the cabin, it was simply carrying wood.

Seriously, I don’t want to poison the woodrat. That’s not ethical, at least for me, until I’ve tried harder at everything else. If I poisoned it, other bushy-tailed woodrats would re-populate the cabin, smack in the middle of their habitat, and we’d have to poison again. I’d be setting up an ongoing source of toxins for the food chain beyond the woodrat. I need to patch up the cabin in dozens and dozens of places, trap out whatever woodrats there are, and stay on top of it. If I can.